Our unique land swap in W2 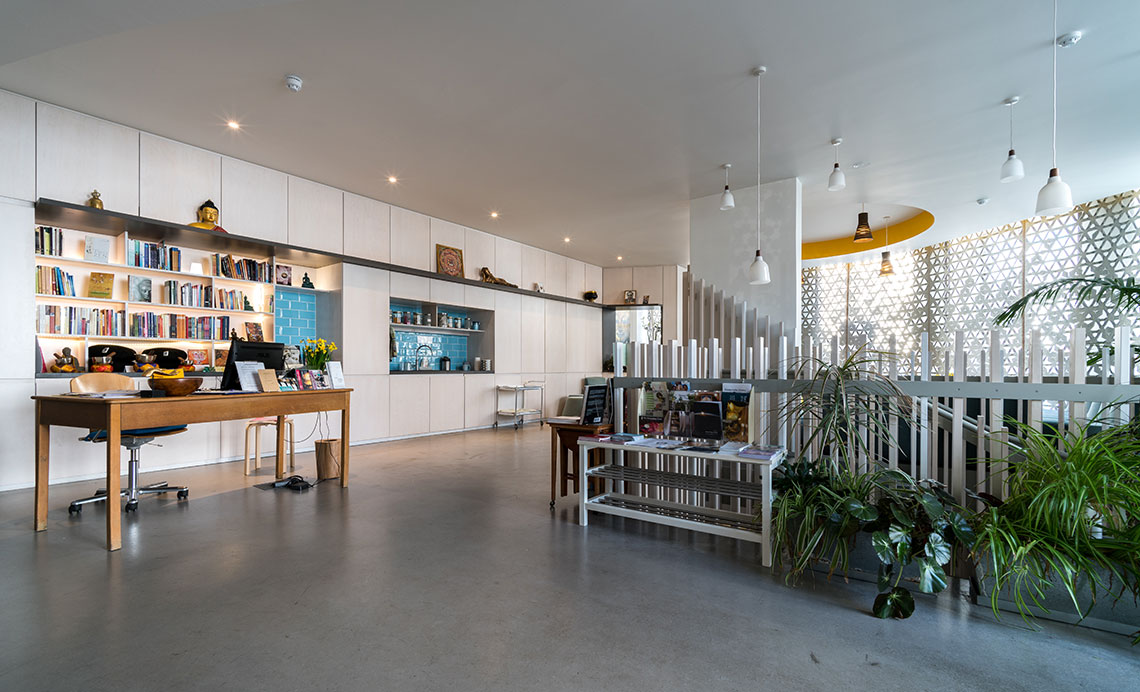 Two years on, we caught up with the West London Buddhist Centre to discuss how they have settled in to their new premises in Royal Oak.

In 2014 and 2015, we worked closely with the West London Buddhist Centre on a unique land swap. This involved the purchase of their premises at 94 Westbourne Park Villas and re-housing the centre, including a new fit-out, at our One Westbourne Gardens development.

We recently caught up with Yashobodhi two years on from their move, a teacher of Meditation and Buddhism, who is also a key member of the council and assists in the running of the centre.

As a general overview, what is it that the Centre provides?

The Centre is focused on practicing Buddhism and Meditation, with more than 12 permanent teachers and therapists in total at the Centre. It does however stretch to further classes and practices, such as mindfulness, bodywork – a unique and holistic approach to treating the body, yoga, film nights and music concerts. Concert performers appreciate the quality of attention from those that attend – and it is usually very intimate with a maximum of 50-60 people in attendance.

How many visitors does the Centre currently have and from which areas of London?

I would estimate that there have been over more than 20,000 visitors in the past 12 months, a lot of them repeat visitors The Centre’s catchment area is impressively broad, not only attracting local visitors from West and North West London but those from further afield such as as Richmond, Fulham, Kilburn and Hampstead.

"The first moment I stepped into the new shrine room, I was overcome with tears. It is a truly beautiful new home for us and will comfortably accommodate future growth."

Is the Centre involved in the wider community?

The Centre actively takes part with many community initiatives, including involvement with Wandsworth and Westminster Mind. We also provide community classes on bodywork and offer an open-day for locals every three months, while our therapy room is also regularly used by local therapists.

How did the change in premises come about? Had the Centre been looking at suitable locations in the area for a long time?

The previous space at 94 Westbourne Park Villas was never ideal; it was not sufficient for meditation and the increasing number of visitors to the Centre. We were searching for a long time and struggled to find something that could accommodate our needs – but then we heard locally about the new development at One Westbourne Gardens, and the D1 class property requirement within it. Once we had approached Fruition Properties regarding our requirements, we reached an agreement involving a land swap that worked well for both parties. Fruition Properties was then able to redevelop 94 Westbourne Park Villas. We would then relocate to local, larger and more efficient premises, with the added benefit of designing a new fit-for-purpose Centre from scratch. 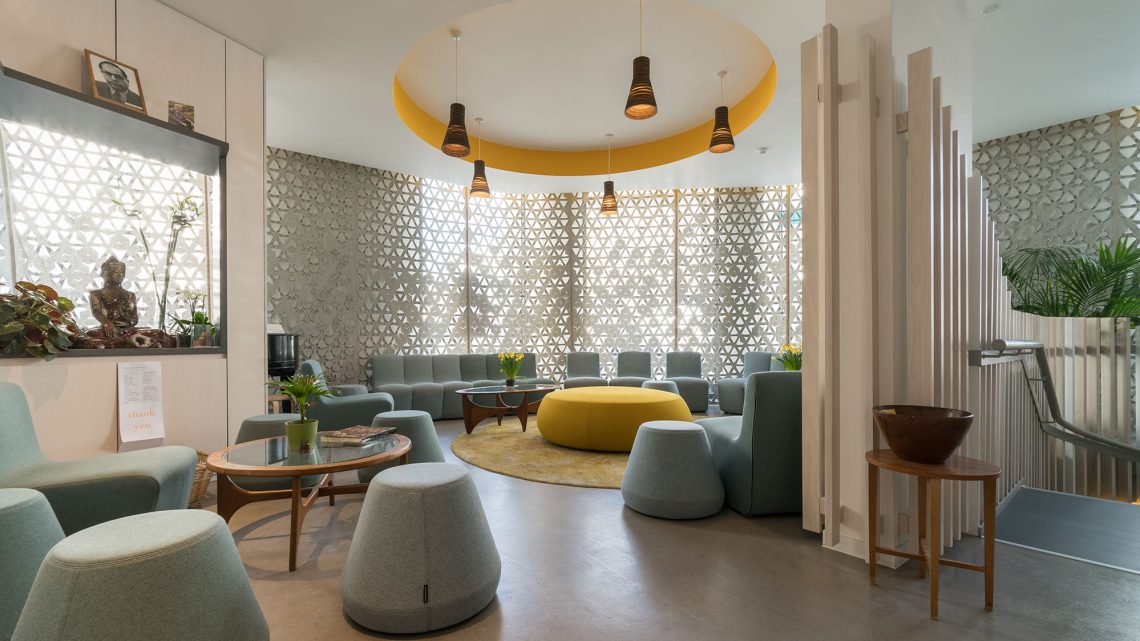 How actively involved were you with the move process and design of the new space? What benefits did this bring?

We were extremely involved from the start, which was excellent and allowed us to break the space up accordingly with a public entrance and lively ground floor space. The ground floor was always destined to have a more public setup, with a reception area, in addition to a studio space, treatment room and office for the Centre. The lower ground floor contains the two shrine rooms, a break out area leading down from the stairs to talk and socialise, in addition to a library and kitchen/bathroom facilities for staff and instructors. We were also able to incorporate a disabled lift which provides additional convenience.

What design aspects did the Centre introduce with the architects?

Our initial approach with the architects was to identify the ideal layout of the Centre, while also overcoming several obstacles, including issues of privacy, sound acoustics and lighting, due to the corner location. Once this had been established, we worked on ways in which we could add the right aesthetic to the space, producing design symbolic to both what we do and the local area. The main aim of the design was to create a space of solace and tranquillity that would also endure over time. We achieved this with natural materials, while intelligently utilising space, natural light and artificial light, as well as some bespoke interior design features. A bespoke veil runs across the entirety of the outer curve of the building on the ground floor, providing not only a stunning backdrop but limiting the amount of natural light flowing through while acting as a key sound absorbent. The curvature of the building is also reinstated elsewhere, with curved recessed ceilings in key spaces and curved interior walls running along corridors and select rooms.

Inspired by the previous Royal Oak building, and being in close proximity to Royal Oak itself, we decided to use as much oak as possible internally. This is evident in not only the furniture but also the extensive use for flooring in the studio and shrine spaces, for the shrine itself, the staircase and handrails, as well as the library. The staircase is one of our favourite features, acting as a key focal point that runs between the two, very different spaces – both beautiful and functional.

As everything was reaching completion – and the first moment I stepped into the new shrine room, I was overcome with tears. It is a truly beautiful new home for us and will comfortably accommodate future growth.

What has the feedback been from visitors of the Centre, old and new, following the move? Have you seen an uptake in visitors?

Two years on we can say with vigour that people love the space. There was so much effort put into creating an ideal space for the Centre, and although it took some people a little time to get used to, everyone seems to really love it. We haven’t lost any of our regulars which would usually happen when a Centre moves. This is partly due to locality but also the improved facilities and transportation links – we have several tube stations nearby on different lines, which has made the Centre considerably more accessible for some. We have also seen a few new regulars that have come from other Centres and a clear increase in overall numbers.

Was it a smooth process working alongside Fruition Properties on the move?

Certain aspects can be complicated as expected with any large project but it was motivating to work with such a professional organisation. Mani, the Managing Director, was our main point of contact during the move. Although he is an incredibly busy man who can be difficult to get hold of at certain times, he was very sympathetic to our needs, whilst being both friendly and professional at all times. On top of this, all of the employees we have worked with at Fruition Properties have been a pleasure to deal with, helping to turn what could have been a stressful process into something enjoyable.

Would you recommend Fruition Properties to other organisation and home-buyers?

I would absolutely recommend Fruition Properties. Their approach is both professional and personable, while the land swap and move we have achieved is the best thing to have ever happened to the WLBC, ensuring our future and the growth of the Centre.

"All of the employees we have worked with at Fruition Properties have been a pleasure to deal with, helping to turn what could have been a stressful process into something enjoyable."